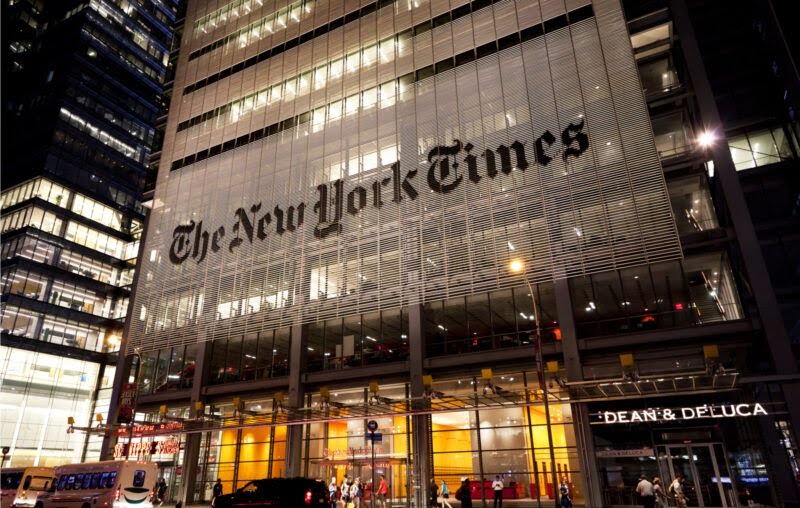 The paper of record in 2020 shifted dramatically to the most illiberal stance possible on the virus, pushing for full lockdowns, and ignoring or burying any information that might contradict the case for this unprecedented experiment in social and economic control. This article highlights the exceptions.

The first shocking sign of the placing of a persistent bias was a podcast with reporter Donald McNeil on February 27. This was the beginning. It was grossly irresponsible. He asserted that half the American public would get this disease and that it would have a case fatality rate of 2.5%, or 25 times as deadly as flu, hence 4.8 million dead people. No consideration of demographic gradients in risk and no knowledge of viral basics such as the tradeoff between severity and prevalence. Even if you leave aside the fog of fatality misclassification, he exaggerated the risk by 12 times but still spoke with a sense of certainty designed to create panic.

Host Michael Barbaro himself seemed shocked: “I thought you were here to bring calm, Donald.”

“I’m trying to bring a sense that if things don’t change, a lot of us might die,” he said. “If you have 300 relatively close friends and acquaintances, six of them would die.”

The primal fear of disease is thus thrown into massive overdrive, following 100 years in which public health tried to bring rationality to the topic.

That podcast was followed by an op-ed by the same journalist/pundit: “To Take On the Coronavirus, Go Medieval on It.” It seemed incredible that such a responsible outlet would advocate the overthrow of a century of public-health wisdom and even immunological basics, but that’s what they did. At this point, the New York Times was fully committed to the narrative that we must dismantle society to save it. And there it has been for nearly a year of unbearably biased coverage.

Even within the blatant and aggressive pro-lockdown bias, and consistent with the way the New York Times does its work, the paper has not been entirely barren of truth about Covid and lockdowns. Below I list five times that the news section of the paper, however inadvertently and however buried deep within the paper, actually told the truth.

1. Your Coronavirus Test Is Positive. Maybe It Shouldn’t Be. Byline: Apoorva Mandavilli

I’m still stunned that the paper did a study that confirmed what people have suspected, namely that a high cycle threshold used on PCR testing was creating the appearance of a pandemic that might have long receded. The testing mania was generating wild illusions of millions of “asymptomatic” carriers and spreaders. How severe was the problem? Read this and weep:

In three sets of testing data that include cycle thresholds, compiled by officials in Massachusetts, New York and Nevada, up to 90 percent of people testing positive carried barely any virus, a review by The Times found.

On Thursday, the United States recorded 45,604 new coronavirus cases, according to a database maintained by The Times. If the rates of contagiousness in Massachusetts and New York were to apply nationwide, then perhaps only 4,500 of those people may actually need to isolate and submit to contact tracing.

The implications of this revelation are incredible. A major reason for the ongoing lockdowns are due to the pouring in of positive case numbers from massive testing. If 90% of these positive tests are false, we have a major problem. The whole basis of the panic disappears. All credit to the Times for running the article but why no follow up and why no change in its editorial stance?

Gone missing this year in public commentary has been much at all about naturally acquired immunities from the virus, even though the immune system deserves credit for why human kind has lasted this long even in the presence of pathogens. That the Times ran this piece was another exception in otherwise exceptionally bad coverage. It said in part:

Scientists who have been monitoring immune responses to the virus are now starting to see encouraging signs of strong, lasting immunity, even in people who developed only mild symptoms of Covid-19, a flurry of new studies suggests. Disease-fighting antibodies, as well as immune cells called B cells and T cells that are capable of recognizing the virus, appear to persist months after infections have resolved — an encouraging echo of the body’s enduring response to other viruses….

Researchers have yet to find unambiguous evidence that coronavirus reinfections are occurring, especially within the few months that the virus has been rippling through the human population. The prospect of immune memory “helps to explain that,” Dr. Pepper said.

Reinforcing the solid point above:

Data from monkeys suggests that even low levels of antibodies can prevent serious illness from the virus, if not a re-infection. Even if circulating antibody levels are undetectable, the body retains the memory of the pathogen. If it crosses paths with the virus again, balloon-like cells that live in the bone marrow can mass-produce antibodies within hours.

It’s still a shock that so many schools closed their doors this year, partly from disease panic but also from compliance with orders from public health officials. Nothing like this has happened, and the kids have been brutalized as a result, not to mention the families who found themselves unable to cope at home. For millions of students, a whole year of schooling is gone. And they have been taught to treat their fellow human beings as nothing more than disease vectors. So it was amazing to read this story in the Times:

So far, schools do not seem to be stoking community transmission of the coronavirus, according to data emerging from random testing in the United States and Britain. Elementary schools especially seem to seed remarkably few infections.

Another strangely missing part of mainstream coverage has been honesty about the risk gradient in the population. It is admitted even by the World Health Organization that the case fatality rate for Covid-19 from people under the age of 70 is 0.05%. The serious danger is for people with low life expectancy and broken immune systems. Knowing that, as we have since February, we should have expected the need for special protection for nursing homes. It was incredibly obvious. Instead of doing that, some governors shoved Covid patients into nursing homes. Astonishing. In any case, the above article (and this one too) was one of the few times this year that the Times actually spelled out the many thousands times risk to the aged and sick as versus the young and healthy.

The op-ed page of the paper mirrored the news coverage, with only a handful of exceptions. Those are noted below.

Is Our Fight Against Coronavirus Worse Than the Disease? Op-ed by David Katz

I am deeply concerned that the social, economic and public health consequences of this near total meltdown of normal life — schools and businesses closed, gatherings banned — will be long lasting and calamitous, possibly graver than the direct toll of the virus itself. The stock market will bounce back in time, but many businesses never will. The unemployment, impoverishment and despair likely to result will be public health scourges of the first order.

Worse, I fear our efforts will do little to contain the virus, because we have a resource-constrained, fragmented, perennially underfunded public health system. Distributing such limited resources so widely, so shallowly and so haphazardly is a formula for failure. How certain are you of the best ways to protect your most vulnerable loved ones? How readily can you get tested?

During the Covid-19 pandemic, the world is unwittingly conducting what amounts to the largest immunological experiment in history on our own children. We have been keeping children inside, relentlessly sanitizing their living spaces and their hands and largely isolating them. In doing so, we have prevented large numbers of them from becoming infected or transmitting the virus. But in the course of social distancing to mitigate the spread, we may also be unintentionally inhibiting the proper development of children’s immune systems.

What Has Lockdown Done to Us?. Op-ed by By Drew Holden

Our mental health suffers, too. The psychological effects of loneliness are a health risk comparable with risk obesity or smoking. Anxiety and depression have spiked since lockdown orders went into effect. The weeks immediately following them saw nearly an 18 percent jump in overdose deaths and, as of last month, more than 40 states had reported increases. One in four young adults age 18 to 25 reported seriously considering suicide within the 30-day window of a recent study. Experts fear that suicides may increase; for young Americans, these concerns are even more acute. Calls to domestic violence hotlines have soared. America’s elderly are dying from the isolation that was meant to keep them safe.